Ariana Grande shocked us all with news of her engagement to Dalton Gomez back in 2020, and more importantly - with her brand new engagement ring! Ways apart from the usual glitz and glam adorned by hollywood’s biggest stars, Dalton, (who designed the ring himself) opted for a more conservative approach to his belle. Though the rock is by no means small, experts estimate it to be no larger than 3-5 carats, which is relatively modest for one of Hollywood's top ranking A-list celebrities. In addition to its size, the unique diamond and pearl pairing proved to be a hot topic of debate among jewelers and fans alike. Though the pearl accent was speculated to be a sentiment to Ariana’s late grandfather, jewelry experts were quick to criticize the decision due to pearl’s low ranking on the Mohs hardness scale. Diamond, being the hardest of gems, ranks a 10 on the scale, while pearl weighs in at a measly 2.5. This disparity in hardness leaves Ariana’s ring extremely susceptible to damage, and is not advised for everyday wear according to our specialists.

Despite the controversy, Dalton’s ring managed to capture many of jewelry’s hottest trends this year, including a two stone setting, an elongated oval shape centerstone, and an off-center tilt. With oval shapes and two stone engagement rings already on the rise in popularity, Ariana’s new ring has only added fuel to the fire. Classy, chich, and now easily attainable, here's a breakdown of how to get the look without the risk- or the Hollywood price tag! We’ve teamed up with our diamond specialists to give a real estimate based on 3 different price tiers: 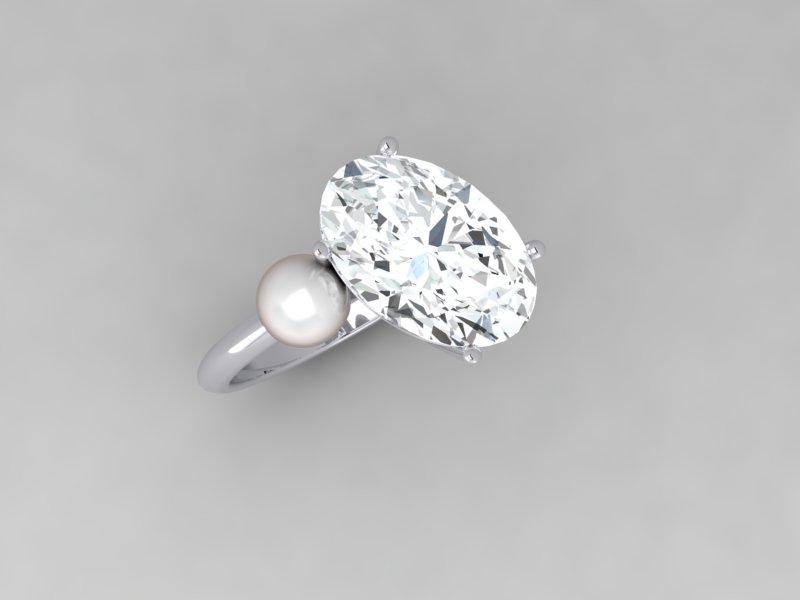 Though it is by no means the cheapest way to recreate the ring, it’s a good start if you still want to retain near diamond quality. Moissanite is a mineral from the stars, first discovered in a meteor crater in 1893, it’s hardness and optical properties soon made it one of the most popular diamond substitutes! Since all moissanite is now lab sourced, it makes it the perfectly ethical choice for the conscious consumer.

A 3 + carat custom moissanite center stone paired with a pearl accent and 14k white gold would run you approximately $3,396. 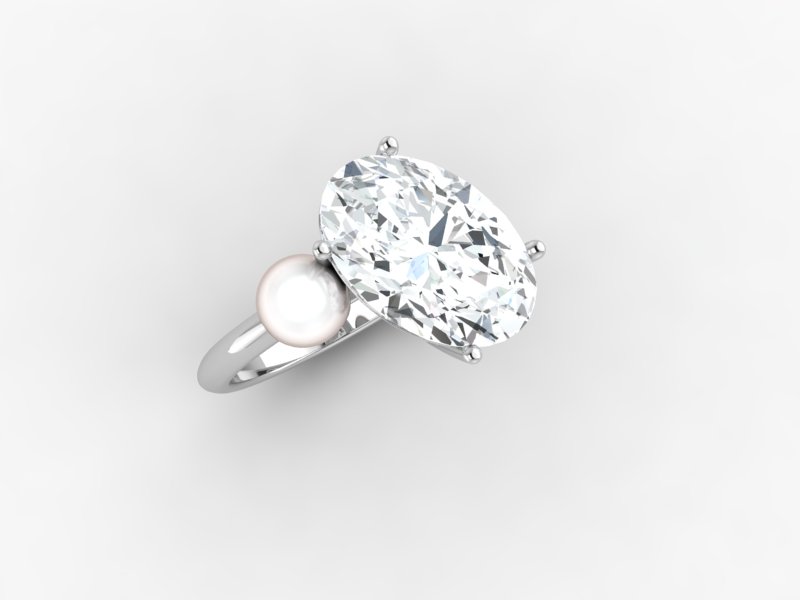 A tier up from Moissanite would be a lab diamond setting. An excellent quality F color, VVS2 clarity, 3+ carat weight  lab diamond ring would be approximately $22,896. Not exactly cheap, but still a great deal compared to the estimated $200,000 ariana ring- plus it’s a real diamond near indecipherable from a natural! 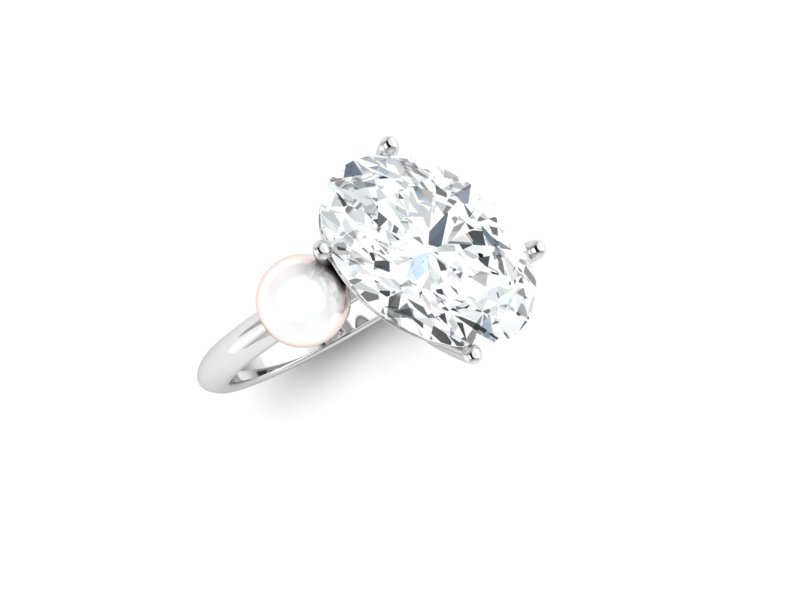 Last, but certainly not least would be a near perfect replica to Ariana's ring  itself! Using a natural diamond of similar size/carat weight to the lab grown or in the 3.3+ carat range, with F color and VVS2 quality would cost you approximately $79,630. Leaving room to tweak color, size, and clarity by moving them up a notch or down could have you paying approximately $66,830 at the lowest and $97,273 at the highest!

Feeling inspired to create a ring similar to Dalton's? You can customize your own at the same same rates listed in this article online or in person free of charge! 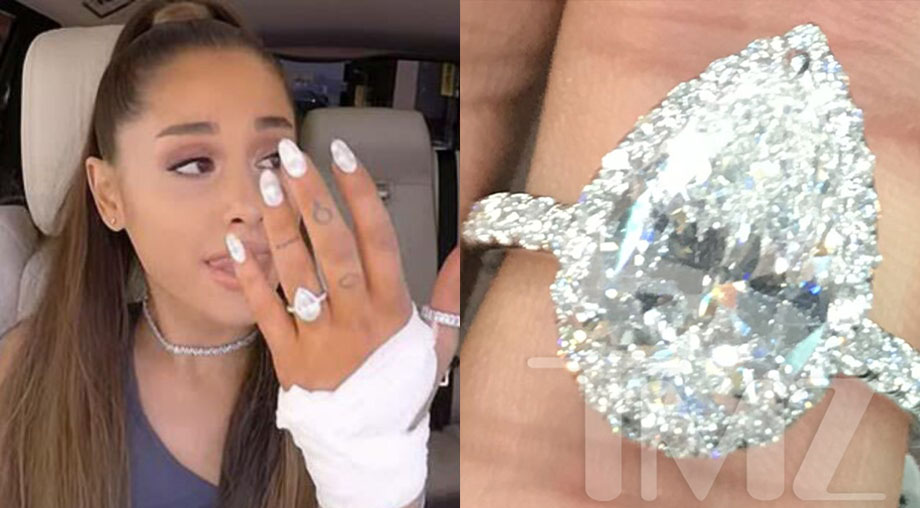 Dalton’s ring wasn’t the only engagement ring the 7 rings singer flaunted. Her infamous month-long engagement to (now ex) Pete Davidson also resulted in a spectacular sparkler! Contrary to Dalton’s trend-setting ring, Pete’s ring was very much in line with what you would expect from a front-page hollywood engagement. Pear shaped and dripping in melee diamonds, Pete’s halo style ring brought Ariana’s flirty and feminine style to the forefront. The extra sparkle however, might not have cost as much as you think. Also weighing in with a 3 carat center stone and a 1.34 ctw halo & shank, Pete’s ring is worth an estimated $93,000- not too shabby for a celebrity ring! Fancy Pete’s glamorous style more? Here’s the price breakdown:

The same ring with a D color, VS1 clarity center stone would cost about $24,849.

A platinum ring with all natural diamonds, F-G color, VS clarity, excellent shapes, and where the center diamond is also natural would cost about $74,555.

Pear shape diamonds have soon become one of the most loved shapes of year. It's rounded bottom paired with it's sharp tip makes it the perfect symbol for life long love- a half heart. Classy and fun, this shape is timeless and will never go out of style. If you enjoyed the pear-shape halo style ring, here are some similar rings ready to buy at Joseph Jewelry . Our on site specialists are here Monday- Saturday to help you customize, design, and bring your favorite rings to life- at any price range! 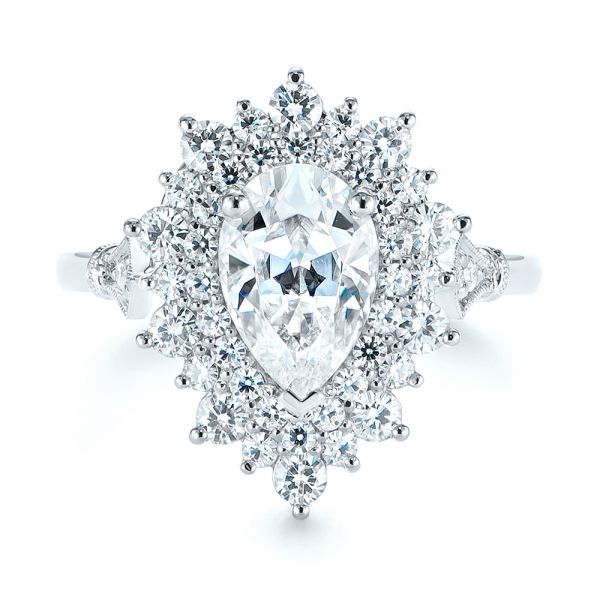 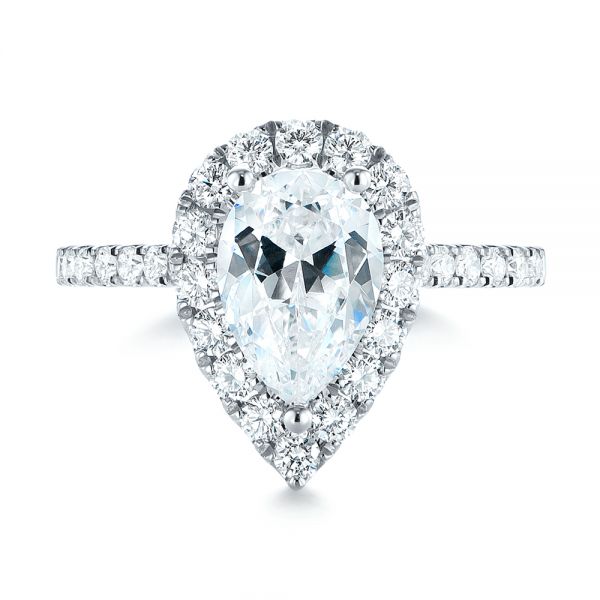 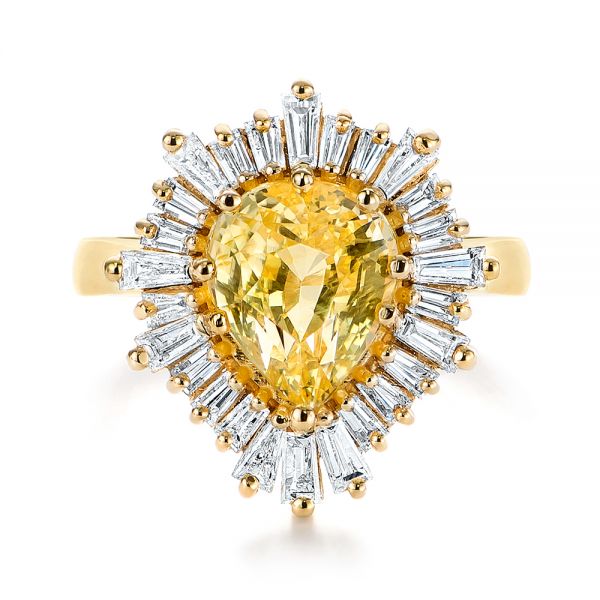 Low profile rings stay close to the finger. We often receive requests from our clients to create their ring with a low profile. With custom design, anything is possible.

Cushion cut diamonds are surging in popularity. Read on to learn more about the cut, compare it to other cuts, and shop our top cushion cut engagement rings.