"I broke the news to her that we would not be getting brunch, but instead we would be going on a surprise trip..."

"I met Ali at a friend-of-a-friend's Halloween party on the night of Oct. 31st, 2015 in Indiana. I went to this party with several of my close friends. I mostly stuck with my group of friends throughout the night, eventually playing cards with them at a card table set up in the corner of the apartment we were at. When we finished playing cards, my friends went off to get some drinks while I stayed back at the table, boxing the cards back up (I didn't want to leave a mess at the table!).

Before I could finish putting away the cards, a group of several people came up to the card table and one of them asked me "So what are we playing?" Luckily I was feeling pretty social that night, so I whipped the cards back out and started teaching these strangers how to play Irish Poker. They went around their group one-by-one introducing themselves to me, and then the girl standing next to me introduced herself as Ali, with a big smile on her face. I actually did a double-take and asked her what her name was again because I was distracted by how pretty she was!

We struck up a conversation and kept talking throughout the night, just having a really fun time. We exchanged numbers and began dating soon afterwards, now we're going to be married in the Summer of 2020!" 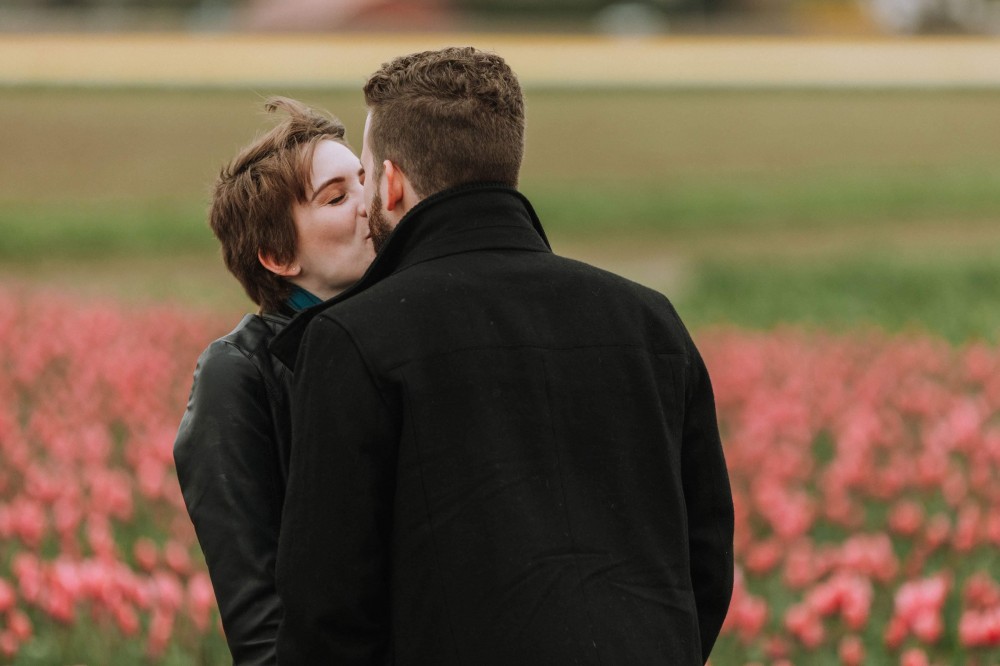 It's a beautiful cushion cut diamond with a diamond halo set in a minimalist rose-gold band. 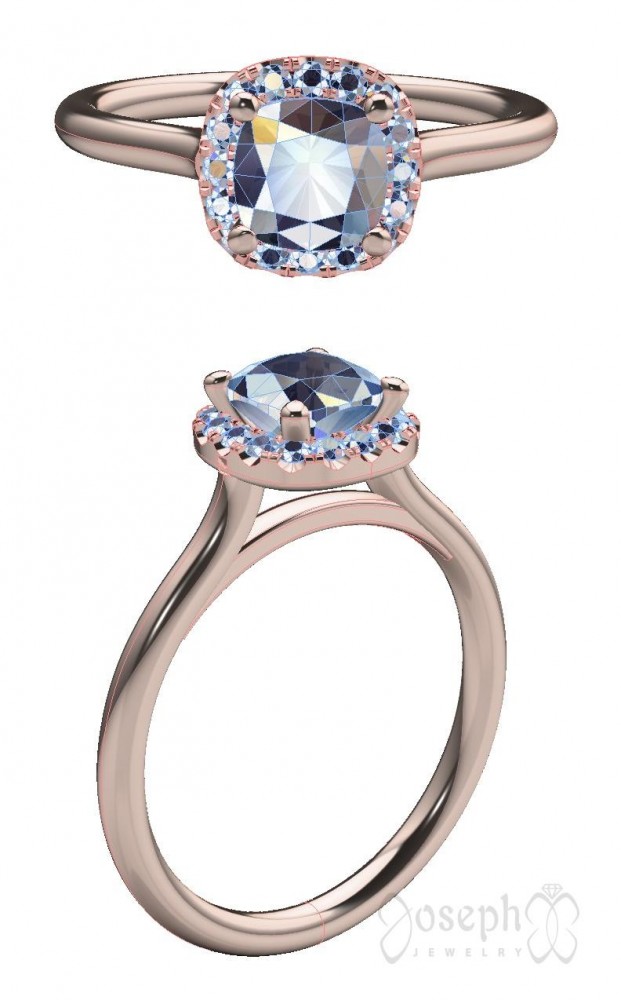 "Going custom made the whole process of incorporating Ali's design preferences much easier than trying to find a pre-made one." 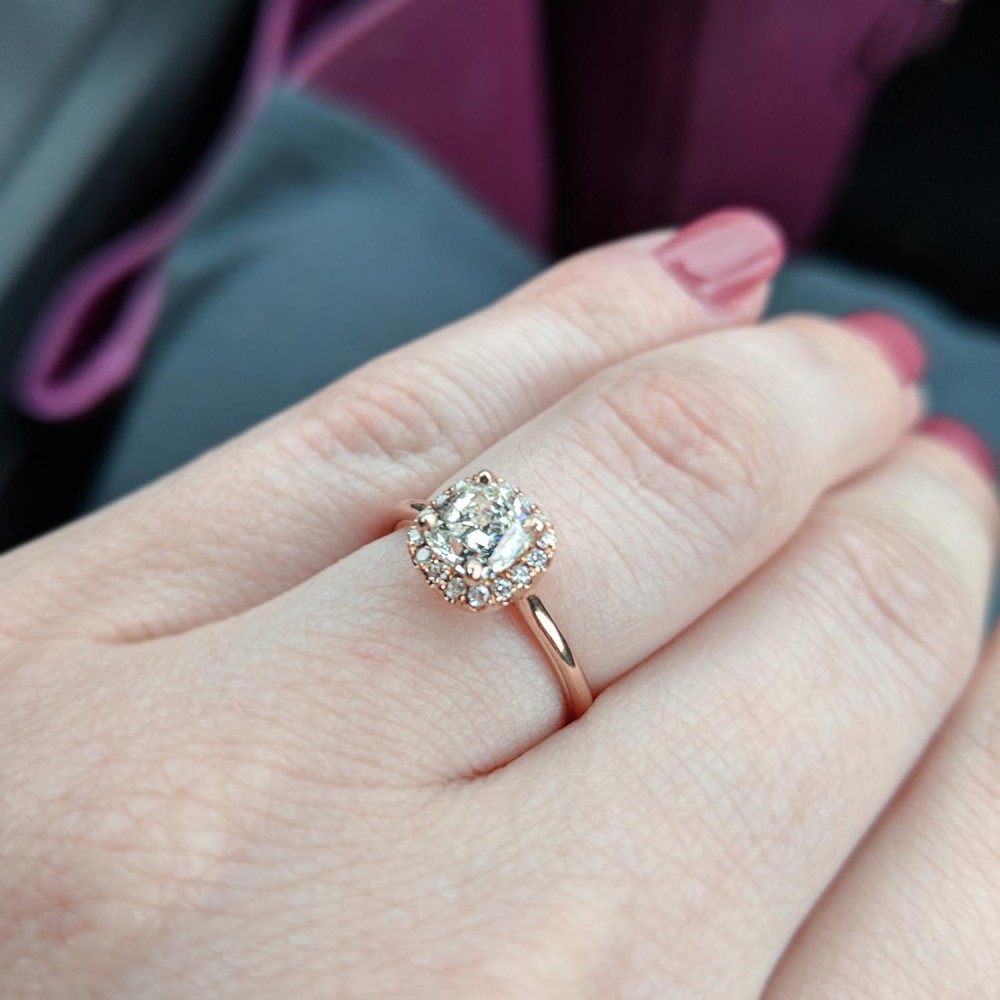 "I proposed to Ali in the Tulip fields at Roozengaarde in Skagit Valley, WA. I wanted the trip to the tulips to be a surprise, so I told her earlier in the week that we would be going to an early brunch Saturday morning to prevent her from making other plans. While we were getting ready for "brunch", I broke the news to her that we would not be getting brunch, but instead we would be going on a surprise trip! She didn't want to know the destination until we arrived, but as soon she started seeing tulips, she got very excited! (tulips are her favorite flower).

We enjoyed walking through the show gardens at Roozengaarde and taking pictures. All the while I had a hired photographer (Klear Photography) following us around, ready to capture the moment I proposed. It was such a great moment and I don't know that I've ever been happier!" 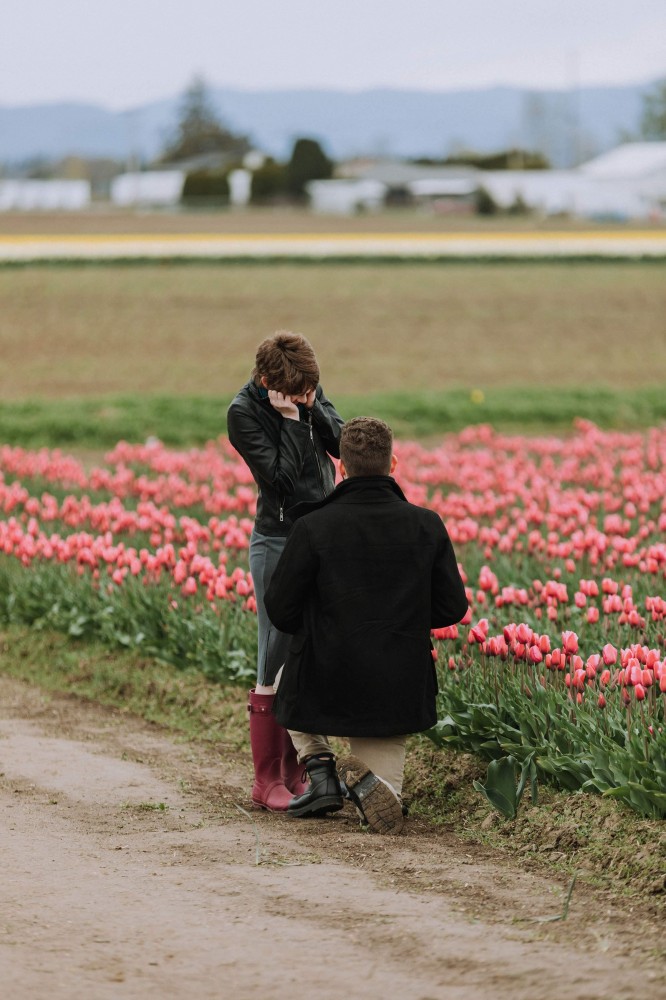 "Definitely discuss with one another your long-term intentions regarding your relationship, do you both want marriage? Are you both ready to get married? This conversation should definitely happen before either partner decides to pop the question.

As for ring shopping, Ali and I decided to both go in together and look at rings with a jeweler. It is perfectly fine to go in by yourself and surprise your partner with a design, but make sure that's alright with your partner and understand what design features they like."

The wedding will be in July 2020 at Pelindaba Lavender Farm on San Juan Island. "Our dog, Dottie, is going to be our ring bearer!"

Ready to create your own ring design? Start Here

Want to submit your own Engaging Moment? Submit Your Story

Photos used with permission from Josh, Alexandra, and Klear Photography.

No virus can stop love! Kevin surprised Tabitha by proposing during the coronavirus lockdown in April 2020. Read on for this Seattle couple's sweet story.

Lindsay found an extremely rare precious pearl in her seafood dish. She wanted to do something special with it, so we helped her create a custom timeless pendant.

Shervin proposed to Lauren in the Florida Keys with a marquise diamond engagement ring, and she said yes!